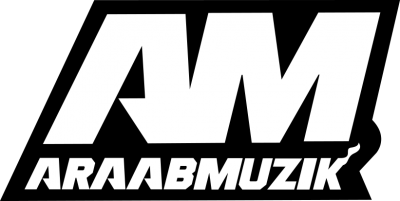 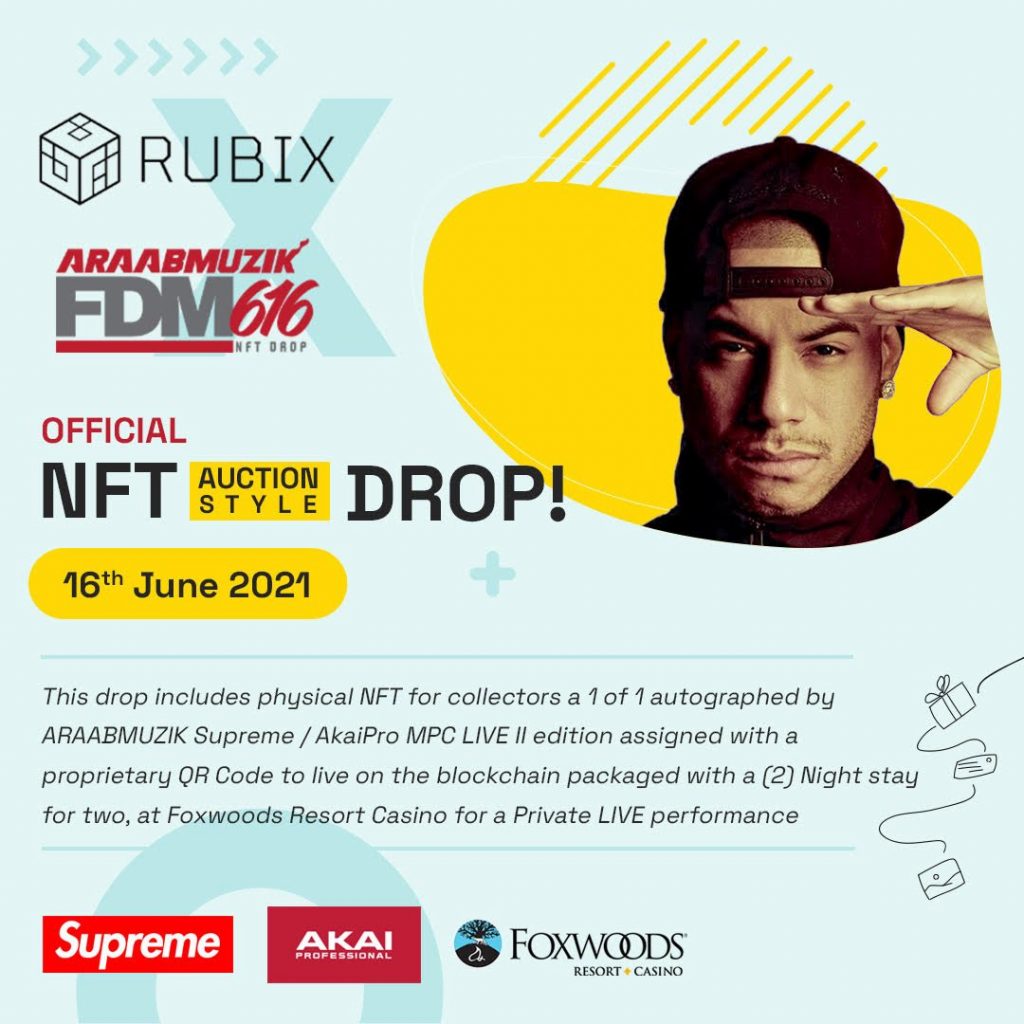 araabMUZIK Announces the Release of His First NFT Drop: "FDM616: 1 in 7 Billion”

This NFT auction style drop will be released on the RubiX Premium Blockchain. This drop includes physical NFT for collectors a 1 of 1 autographed by araabMUZIK Supreme / AkaiPro MPC LIVE II edition assigned with a proprietary QR Code to live on the blockchain, a (2) Night stay for two, at Foxwoods Resort Casino for a Private LIVE performance by araabMUZIK and more.

Globally Supreme and AkaiPro produced a limited number of these MPC LIVE II units and only one is minted as an NFT and signed by araabMUZIK thanks to RubiX technology.

The NFT section for fans and collectors of this drop will include a 1 of 1 digital piece & physical print PLUS other level digital art pieces designed by graphic artists new to the NFT space SwampYankee.

The araabMUZIK FDM616 NFT Drop is backed by RubiX’s proprietary patented technology and is built on the most secure and sustainable blockchain in the market today. The technology incorporates the users’ Passwordless Digital Identity (DID) and unique QR Codes that require authentication for NFT access, preventing the loss or theft of keys. The digital assets used for a RubiX NFT are stored on the RubiX blockchain, not on a centralized server, meaning ownership of the digital asset can’t be accessed by other parties and provides true ownership of the asset.

RubiX will be accepting pre-bids for the araabMUZIK FDM616 NFT auction at https://rubixmarket.com. To learn more about RubiX, visit www.rubix.network.(2) This NFT auction style drop will be released on the RubiX Premium Blockchain. This drop includes physical NFT for collectors a 1 of 1 autographed by araabMUZIK Supreme / AkaiPro MPC LIVE II edition assigned with a proprietary QR Code to live on the blockchain packaged with a (2) Night stay for two, at Foxwoods Resort Casino for a Private LIVE performance by araabMUZIK and more.

AraabMUZIK is a talented Grammy nominated Producer / Finger Drummer and brand ambassador from Providence, RI, who brings the element of live performance to the Hip Hop, electronic, pop and dance music world.  Born into a musical family he learned to play the drums when he was three and by the age of ten, he was playing the piano and producing. His rise to fame began in 2006 when he started beat battling on the MPC and was discovered by Duke Da God. He went on to produce a number of hits for Dipset, becoming an asset to the music-production world. YouTube served as a platform for showcasing his energetic live performance introducing a one of a kind talent on the MPC instrumachine.

He has hypnotized audiences with his lightning fast hands and the ability to turn his AKAI (MPC) drum machine into an instrument made just for him. In doing so he was asked to join A-Trak on his Gold Gone Wild tour in 2015. Aside from touring with A-Trak and doing his own shows he has been busy rebuilding his business, attaching himself to brands that represent his movement, and collaborating with new artists and established producers within Dubstep, House, Trance, Trap, Pop and Hip Hop creating a new hard-hitting sound he dubbed as FDM (Finger Drumming Music).

Fast forward to 2021 he has released a few more albums, produced for more notable artists such as Rick Ross, The LOX, Dave East and Jay Electronica’s “The Blinding” featuring Travis Scott and Jay Z where he was nominated for a Grammy.

AraabMUZIK is a talent whose only competition is himself. The music producing-liveperforming-instrumachine phenomenon is truly one in seven billion!

RubiX has primarily two types of tokens: Protocol tokens generated with strong mathematical proofs that are mined by nodes working to secure the network by storing proofs (capped under 51 million), and Asset tokens that can represent any underlying asset or contract including NFTs. DeFi or smart contracts, RubiX Network is an aggregation of several account-chains existing in parallel. Transactions achieve consensus individually, allowing for asynchronous parallelism leading to very high scalability. Account-chains are linked through unique tokens & token chain hashes.